With some teams you can’t mention their name without the visage of their “larger than life” Chairman/Chief Exec/Big Wig looming into view, distracting everybody from the football.

In most instances this is a bad thing… Because as you know if all the focus in on the chairman, it means trouble for the clubs.

This is not always the case, there are some club owners/major shareholders out there who’d rather not be in the spotlight, such as Randy Learner at Villa, Ellis Short at Sunderland and Stan Kroenke at Arsenal.

…And at the other end there are those who love the spotlight, such as Watford’s former chairman, now life president Elton John:

There are others who also can’t resist the glare of the lights, such as Simon Jordan formerly of Crystal Palace and Karren Brady at West Ham – and The Apprentice.

Then there are some, in fact there are many who could be contestants in a very unfunny TV reality show.
At least in their own heads. These people when they first arrive, they always seem to be welcomed by the fans as the saviour of their club. But then things turn ugly…

Once again I could expand on what is a long list of chief execs who eventually became a liability but as I said, life is too short and anyway… 1) You are not here for that – and 2) the fine chaps over at cover this subject with aplomb, as Ron Manager might say.

But what I want to do is a mini-feature on two particular “characters” who always gained strong opinion from every quarter once their names are mentioned.

The first one passed away a number a years ago, but his reputation and antics are still remembered by all. 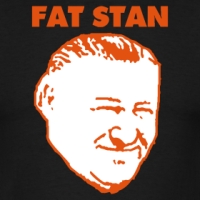 I can see a few of you nodding there. Ah yes. Fat Stan.

There was a period in the very late 80’s/early 90’s when Barnet F.C, with their manager Barry Fry and especially their own, the ex-ticket tout (could get you tickets for anything. Garden Party with the Queen ? No problem son) Flashman making the non-league and then league headlines.

Sometimes all the planets align and for Barnet in 1990 they gained promotion from the Conference to the Football League, but it wasn’t without some bumps along the way. There was a stormy relationship between Barry Fry and the owner, with Flashman repeatedly sacking Fry and then reinstating him soon after.

Fry recalls in his time at Barnet:

…”Actually, Stan could be the most generous man in the world one minute, but he was pure evil the next. He’d threaten to have you encased in a motorway bridge, things like that.” Fry chuckles. “I had nine amazing years with Stan, on the field and off. Together, we got Barnet into the Football League and it was an adventure from day one. Our first game against Crewe ended 7-4… and we got the four. Then we played Brentford and it ended 5-5.

“But Stan was a real bad loser. He’d threaten to break players’ legs if he didn’t think they’d played well. We had one lad, Harry Willis, and Stan came into the dressing-room once and said ‘Willis, you were hopeless today, you’ll never play for Barnet again.’ I said ‘yes he will, Stan, he’s playing against Watford in the Herts Senior Cup on Friday.’ And Stan said, ‘if you turn up on Friday, Willis, I’ll break your legs with a cricket bat.’ …”

But then things started to go wrong. Very wrong. There were financial irregularities at the club, the one that Flashman has saved from administration in 1985, but then in 1992 the money was gone. Players were not getting paid, the Inland Revenue wanted to take a look at the books…

Below is a YouTube playlist of The London Programme, this episode aired in April 1993 looked at the club and their plight. In the first minute of each clip the very rotund figure of Flashman is seen. In Part 1 he pulls up in his car and threatens a camera crew. In Part 2 Barry Fry is seen telling the players that the cheques that have bounced, Stan will come and pay them in cash after their match. Then in Part 3 Flashman resigns because of ill health and says he has sold the debt ridden club.

Our next subject is still looming VERY large on the horizon… 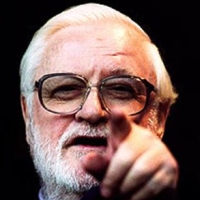 Ah now your eyes narrow at the mention of that name.

Currently he’s the chairman of Leeds United as well as being co-owner, but there’s questions as to who co-owns it and where are these companies or individuals. Either the Channel Islands or the other tax haven in the Caymen Islands and a shell company…?

Things are always murky when Master Bates is involved and David Conn of the Guardian has done some excellent investigations which got them banned from Elland Road because of his coverage.

This is not the first time either that questions have been raised over the ownership of a club in which Bates has been involved. It happened previously 2005 with Chelsea and that was never really resolved.

It was pretty much nearly the same story as Stan Flashman and Barnet at the beginning. The club were in serious financial trouble and were threatened with relegation to the Third Division.

Bates then came in and bought the club for a nominal sum of £1. After that he fought a long legal battle to gain the freehold of Stamford Bridge which he eventually won because the property developer who held a portion of that freehold went bankrupt after a mark crash. Because of this he was able to do a deal with the banks and get himself a bargain. Bates then reunited the freehold to the club.

In the years that Bates spent at Chelsea he attracted the headlines on many occasions, mostly because of his notes in the Chelsea programmes and disparaging remarks about some managers (including his own), players (including his own) and fans – mostly his own. What’s the word you use when describing Bates… ah that’s it. Gobshite.

He didn’t reserve it just to those groups either. He had battles within his own boardroom too:

During the 1990s, he was involved in a bitter dispute with Chelsea benefactor and vice-chairman, Matthew Harding, over the club’s future direction, which led to Harding being banned from the Chelsea boardroom. The dispute was ultimately only ended by Harding’s death in a helicopter crash in October 1996. Bates sparked further controversy by later describing Harding as an “evil man” the following year

But after this period of changes and success at Chelsea the threat of debt loomed once again over the club, but in 2003 he sold the club to Roman Abramovich, for a sum of £140million and made a £17million profit for himself.

As mentioned above Bates was investigated by the FSA for allegedly owning undeclared shares in Chelsea Village plc, but the case was eventually dropped.

Always end on a song…

Now there’s a couple of related Ken Bates and Chelsea songs, both will make you laugh/angry depending on how you view things. Hey don’t shoot me for these, I’m only the piano player.

The first one is from Mr Martini and after hearing… ah it’s got to be tongue in cheek.
Listen to the lyrics and especially the line: "Ken Bates I love you/won't you/answer my prayer. Next season just call me/and I'll be there..."
Plus there’s something about a stone being thrown by Ian Hutchinson…

» Mr Martini – Why I Love Chelsea

This other track… from 1996, during Bates reign of terror and was done by a Canadian fan who dedicated the song to Chelsea.

I have to go and clean myself now…

As I said don’t blame me. Just reporting the facts.