Just like with those Goal! movies, you’d think they would have learnt from the last one. But no… the pain continues. Don’t go. We have to get through this so we can move on.

And just like the above bad representations of footie to the world, the other embarrassing public outing by some singing footballers did not end (as I mentioned the other day) with just that one song.

I am not going to unleash another one from the mullet on you, but this next one is much, much worse…

In 1982 for the World Cup in Spain somebody decided that the England squad would record a whole album. I can’t find any info about it online, but I’m pretty much certain they did. Some of the songs on that album are available via Cherry Red Records, such as their reworking of the song used in a British Airways advert at the time (We’ll Fly The Flag) and their cover of a traditional song – Land Of Hope and Glory. They even got onto Top Of The Pops. (Their chart success was more successful than their final tournament one.)

But I’ve gone off on a tangent…This post isn’t about England and the team singing. This is about one of the players who seemed to like to sing and couldn’t stop himself.

No it is not who you are thinking of. Yes he is the first one you think of when it comes to this, but this other player, who coincidently also managed the England team – badly, is one who played and sang with old mulletboy Waddle. 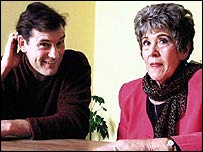 Yes that committed Christian and all round cripple hater Glenn Hoddle was in the England 1982 squad, who sang with the team on the ‘Pops, but also had a solo outing on that England album. (I swear it’s true, they really did a whole LP).

He recorded a cover which I’m surprised that the original composers of the song, high in their profile and in the charts themselves at the time, let him.

Somehow somebody in a moment of weakness suggested to Hoddle that he should do Queen’s “We Are The Champions” for inclusion on the England album and I am certain that it was this and not the fact that England scored zero goals in the final stages that doomed us.

» Glenn Hoddle – We Are The Champions

Just like Jason in those fecking Halloween movies you think that is it.
It wasn’t. HE DID A THIRD SONG.

Hoddle wanted to punish not just the disabled but all music fans everywhere – and he did this by covering yet another sacred cow Paul McCartney’s ode to Julian Lennon – Hey Jude. (30 second mp3 sample here). If you really want to inflict more pain on yourself you can purchase and download it here.

Alright. That’s it. No more. Like pulling a plaster off the skin it hurts for a bit but I’ve ripped that Band Aid off you now. The pain is over.

December 2007 Update:
The pain wasn’t over ! Another offence to music committed by Hoddle just posted.