By the time you get around to reading this, the Real FA Cup might already be over for Blyth Spartans this year or – hopefully they’ve got past Mickleover Sports in the third qualifying round and are in the pot for the 4th round qualifier when the Conference National teams get involved.

Update: They won! They face Leek Town away in the next round.
Another Update: They won again! They are now at home for the 1st Round Proper against The Alty.
Yet another update: They are still going! They play Hartlepool United in the 2nd round next.

And then after that, who knows…

Blyth have had some great runs in the FA Cup. They have (so Wikipedia tells me) reached the first round proper of the FA Cup on 31 times; the second round 13 times; the third round 3 times, the fourth round once and the fifth round once.
Sidenote: The Real FA Cup has some footie & music about their 5th round 1978 FA Cup run.

The furthest they’ve got recently was in the 2008-2009 competition when they got to the third round proper and played hosts to the then Premier League side of Blackburn Rovers, managed by Big Sam.

In the weeks before the game it was announced that Sentanta Sports were going to cover the game live. The old prospect of a giant killing with a Northern League team welcoming a Premier League outfit to their home. With Blyth’s previous FA Cup exploits and a slowly fading Blackburn Rovers team, you could understand why.

As a part of that FA Cup buzz a couple of members from a band who had ties to the North East rushed to the studio to record a single: 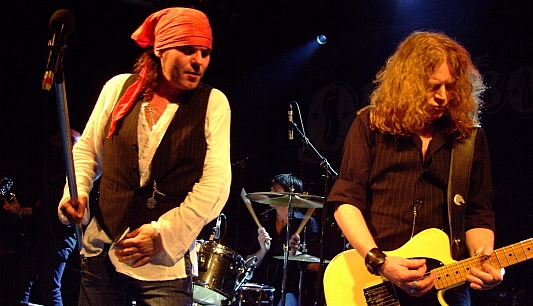 “Blyth Spartans have given the Quireboys their full backing as the band bid to step up their race against time – and release an official anthem for the Croft Park club in time for next month’s FA Cup third round tie against Blackburn.

…But Guerin is determined to work round the clock over the festive period in a bid to boost his boyhood heroes. Spartans secretary Ian Evans said: “We’re right behind the boys and it’s a great idea. Blyth have never had an offcial song and we can’t wait to see what happens.”
» Read more

They managed to record and release a song in time for the match, with the profits going to charity.

To give it it’s full title: “We Are The Famous Blyth Spartans (And We’re Going To Wembley)”

As for the match – Sadly no giant killing for this day, it was a close game and they lost by a single goal.

The band’s association with football and music didn’t end there though.

In 2012 the former Newcastle United player Robbie Elliott and triathlete Phil Gray took part in Biking For Bobby. This was a charity bike ride to raise funds for The Sir Bobby Robson Foundation and Breakthrough Breast Cancer. They both rode over 3,500 miles from Lisbon, Portugal to Newcastle.

Once again Spike and Paul from the band got involved and released a song in support.

This single is still available to download (with as mentioned the profits going to Sir Bobby Robson Foundation) and you can get it here.

EXTRA TIME: One more from them, a bonus tune for you. The band never forgot about their North East roots and penned a tune about it. From their official website:


…If London was the platform required to showcase Spike’s star quality then the Geordie boy come good never forgot his North East roots. The Newcastle United die-hard penned a new take on Tyneside, ironically named Dirty Town, on the band’s 2008 record, Homewreckers and Heartbreakers, and yet it was the era-defining Mayfair which helped launch The Quireboys in the pubs and clubs across the UK.

“Mayfair will always be special to me,” added Spike. “It was the first rock club I went to in Newcastle as a 13-year-old kid dreaming of being a star. I saw my first gig there – UFO. I can still remember it like it was yesterday. It’s such a shame it’s been replaced by a multiplex cinema and a load of trendy bars. I’ve sung that song all over the world and it always gets the crowd going. But in Newcastle they go mental!

“I love where I’m from and my roots. Dirty Town is all about the Toon and it namechecks places like the Quayside which have become part of the social culture up there. It picks up from where Mayfair left off I suppose.””