We’ve seen these last couple of seasons a few grand old football clubs sadly go to the wall. Nearly all of them due to some dodgy ownership. But the fans, those loyal supporters will never let them die. They will help to bring their club back to life in any way possible.

One of those fans using the resources available to them is the band Glass Ankle and what better way to raise awareness to the cause is to release a song.

Well in our opinion there isn’t. Moving on…

An update in case you haven’t kept an eye on recent events: Sadly Macclesfield Town are nowhere. The club sadly went out of existence in October 2020. This wasn’t due to the pandemic or anything, it was because the club was badly run and had debts. The EFL docked points which left Macc Town bottom of League Two and then they were relegated to the National League. Eventually the HRMC were called in and a winding up order was issued. This is a very short and simplified summary of what happened, have a look at the Wikipedia entry for the whole complicated story.

The old Macclesfield Town that was officially ceased when they were suspended from the National League and their record expunged on 12th October 2020, the day after that the Official Receiver confirmed that the assets of Macclesfield Town had been sold to a local businessman, Robert Smethurst. He purchased all the assets and relaunched the club with the name of Macclesfield F.C. (which is what they were called when first formed in 1874) and they will and enter the North West Counties Football League for the 2021–22 campaign.

Even though the club is rescued and the future optimistic, they still need help. Macclesfield F.C is now owned and locally but they don’t have Dubai funds. The aforementioned Glass Ankle band have a tune coming out on 12th March (2021) and all money will be donated to Macclesfield FC and The Silkmen Supporters Trust to be used for the regeneration and rejuvenation of the club and its facilities. 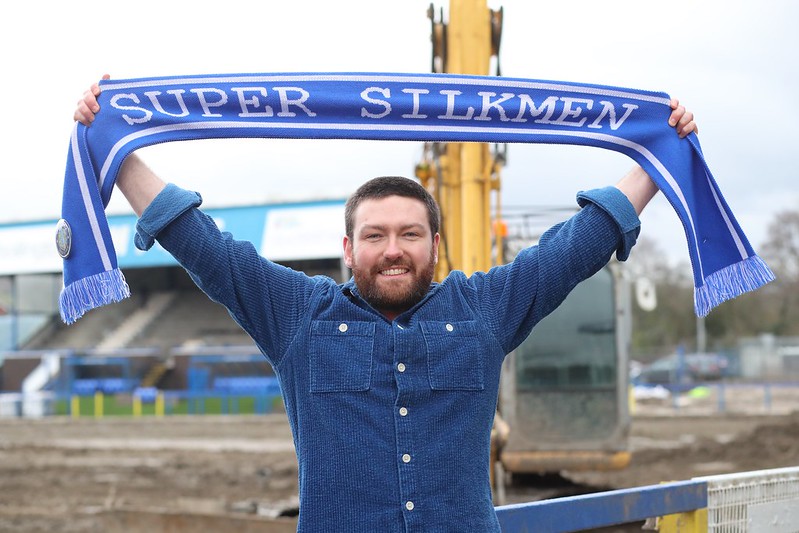 The lead singer, Greg Jackson, along with his Dad were regulars at Moss Road. It was during this plight with Macclesfield Town last year when he first had the idea to record a song for a fundraiser.
Extract from their promo about the tune:

A song born out of a burning passion for a football club on the brink of extinction: I was in a state of despair as Macclesfield Town FC were wound up in the High Court with debts totalling more than £500,000, and subsequently expelled from their league. The writing was on the wall for the club that had been a constant in my life from a young age, having regularly attended matches with my dad and mates right up until lockdown hit. In the face of the devastation, I channelled my thoughts and feelings to create a song that communicated what The Silkmen meant to me. Both Danny and I, it has to be said, thought a song might perhaps help bring the fans together.

The song was called “Save Our Silkmen”, and a demo was released in October which was very well received by fellow fans struggling to process their beloved club’s demise.

Around three weeks later, local businessman, Rob Smethurst thankfully purchased the club, rebranding it as Macclesfield FC in the process. The club was saved!

Spurred on by the supporters’ response to the song, I decided to still go ahead and record a more polished version with tweaked lyrics to reflect the new sense of optimism. “Super Silkmen” is the result.

Enough with the guff. Listen to the song:

You can download it via Bandcamp or via any of these places.

UPDATE: They’ve made a video:

Gregg from Glass Ankle has a blog post with background about the vid, the people and eveything else.

A reminder:
All monies to the club and the Silkmen Supporters Trust to be used for the regeneration of its facilities.

» Find out more about Glass Ankle via their website. They are also on Soundcloud. As well as Bandcamp.