There was a period when the Scotia national team were at the top* of their game. They were the most successful* of the home nation sides in the mid to late 1970’s. Basically England were shit and Scotland ruled them all*

Their golden period began in 1974 when they qualified for their first major tournament in years. But I’m not going to focus on that, we are going to be looking at Scotland (songs) for the 1978 finals.

The main reason is because I’ve got far more audio evidence for this tournament than the previous one.

Four years previously Dalglish was there but this time Kenny brought his mates Souey, Rioch, Hartford and Gemmill.

For the fans they were prepared too. You might think that there were loads of songs when other teams went to the World Cup, but in 1978 we have a list of 25 singles released for Scotland. That’s right, twenty five. That we know about.
I’m not going to post them all, just a few which I think deserve attention.

Starting out with a band who chose a name which is impossible to google now: Company Policy. It is a country-tinged tune with banjo and fiddle which states that they cannae go tae Argentina, but they are sending Ally and his boys in blue. They’ll bring home the cup for me and you.

» Company Policy – We Cannae Go Tae Argentina
Next is this from Hampden Heroes which begins with whistling and accompanying bagpipes. The tune seems so very familiar but I can’t place it right now. I’ve heard it elsewhere. But where…? 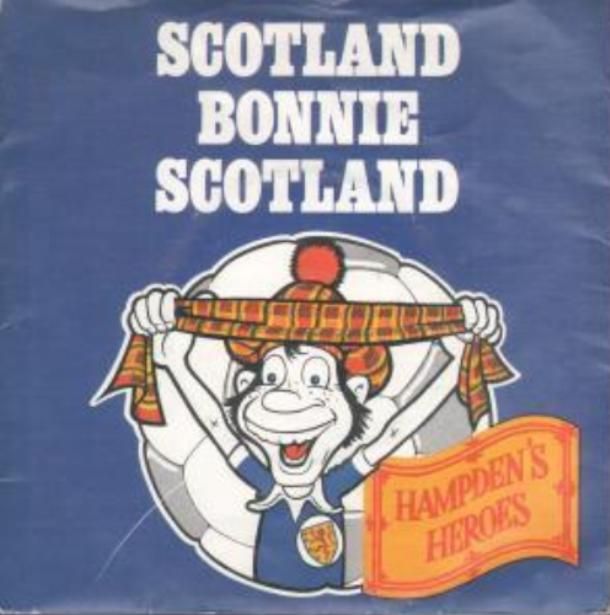 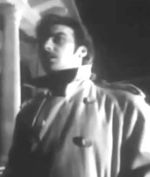 With the above two I suspect they were especially assembled to cash in on this event. This group of musicians: Scotland Sons, yes again formed for the purpose of coining it in. But with these lot they included a bloke who went on to grow a wispy mustache to look moody in a black and white promo video.

Yep that is one James “Midge” Ure, guitarist, singer and songwriter for hire.

But that’s not all. In fact this is only half of the story. Did you also know that the 1978 Dunbarton FC team were roped in to sing in this one – AND – they recorded the same song with different lyrics for their club. Go and have a read of the full story about that.

It is with great thanks to David, who first saw that post and managed to track down this track. The A Side is just here, the full single is on the YT video below.

» Scotland Sons – Hey Argentina
Bill Barclay is from Scottish light entertainment. Bit part actor, radio presenter and occasional singer. Along with Billy Rio And “Buenos Fairies” (big groan) he’s offering Hoat Pies For Us Argentina.
The tune fades in with twin accordions playing and has that essential football song ingredients with the crowd noise in the background. Followed along with everybody singing the simple chorus and yes, there’s bagpipes. Finally it fades out again with a chant of “Scotland, Scotland…Scotland…”
Notes: Cat number on the cover is: 1 NIL, but on the record: NIL 1.

Now we have the most well known belter of Scotia fitba tunes. No not Rod the Mod. You know this bloke as soon as you see his name: Andy Cameron.

“Aye, I remember him” you are saying to yourself. “…We’re on the march with Ally’s Army…” Well actually I bet you didn’t know that wasn’t the only tune he sang that summer.

Hedging his bets I assume to make sure he had at one hit song in the charts – Here’s the other you’ve never heard before. It’s called We’ll Be Over There Over There. And it is thanks to to YouTube user Tom van Dauven that we can have a listen to what that sounds like:

Alright so you’ll be wanting the song now do you:

…and the B side I don’t know if you noticed unless you clicked the above link… I don’t think you really want to hear this but including it for completist purposes.

» Andy Cameron – I Want To Be A Punk Rocker

We might as well put a cap on this with his now legendary appearance on Top Of The Pops:

Why are football records labelled as novelty ? This. This right here.

Before we close out this post – an appeal for these two if anyone has got them:

⇒ This first one was originally released for the 1974 World Cup appearance by the Scotia Squad themselves. Previously mentioned here. Then given another runout not only by the Scottish Football Supporters, but also by a recording artist called: “Christian” Again if you have either of these in your collection drop me a line.

⇒ But I am especially looking for this one, again by some Scottish Supporters. I mean look that front cover. It is a work of beauty. 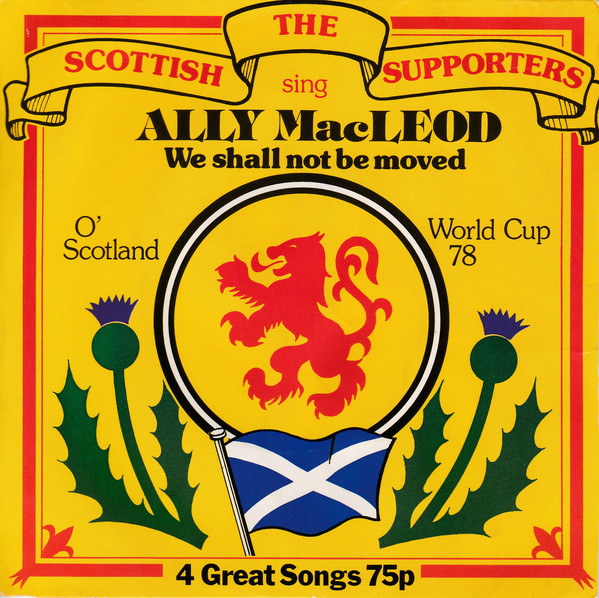 So we end this with the entirely not unexpected and first outing from Rod the Mod. But for reasons unfathomable and unknown to this day, the A Side of the official single was of him doing a cover version of a Brazilian tune…. “It’s South America innit ? Ah just do this one…” The lead song then is Ole Ola (Mulher Brasileira), which translates to: Brazilian Woman. » Rod Stewart – Ole Ola (Mulhera Brasileria)

For the B side they got members of the Scotia national team to turn up. But looking at a publicity photo I found from back then, certain players didn’t show. As neither did Rod himself who seemed to have literally phoned it in.

» Rod Stewart And The 1978 Scottish World Cup Squad – I’d Walk A Million Miles For One Of Your Goals 1. Que Sera, Sera 2. My Mammy

Of course if you asked people outside of Scotland how the 1978 World Cup is remembered, they would invariably mention that moment from the Trainspotting movie.

But in actual history the entire performance by the Scotland team at that tournament needed to be forgotten. Very much forgotten.