Hopefully I’ll get this post done before Charlton play their FA Cup match against Spurs. If I don’t then this should have appeared before Charlton’s third round exit away to…

I know I shouldn’t make those sort of predictions because they tend to blow up in your face, but that sort of thing happens to me anyway. Why fight it.

So as mentioned this coming Sunday it is Tottenham Hotspur (currently 4th in the old 1st Division) who will be hosting Charlton Athletic (currently 5th in the old Division Three) in the FA Cup Third Round Proper.

Charlton have been preparing for this game by… sacking their manager Phil Parkinson.

Well he did get them into the 3rd round of the FA Cup and into the playoff places, what else should he expect ?

OK I admit that Charlton haven’t won a match since the last FA Cup round, and have draw quite a few others, but this is was all in the Chrimbo congestion period. Shouldn’t he have been given more of a chance ?

Well no you see it doesn’t matter about all that anyway. Didn’t matter what the situation was whether they were league league leaders or mid table obscures. Parkinson’s number was going to be up anyway. Why ? Because the club has been taken over by new owners and as we’ve seen at Blackburn – prepare yourselves for a wild ride lads !

After their pounding at the hands of Spurs (I know, I know) they will “concentrate on the league”… as if there’s anything else left for them… and achieve their aim of promotion.

So whilst we watch this phoenix emerge from/get shot down in flames [outcome TBA], we’ll serenade them with the music that plays them on: 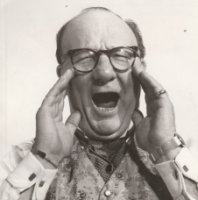 The song heard as they run out for the home games is a very familiar traditional tune: When The Red, Red Robin Comes Bob, Bob, Bobbin’ Along. Which was made famous by Al Jolson, but the version played at The Valley is one by the band leader Billy Cotton.
The Billy Cotton Show Band had a programme on the BBC which ran from 1949 to 1968. Billy opened each show with a very famous shout:

His orchestra’s style of music was performing popular songs of the day, with a touch of comedy. They played tunes with such titles as “I’ve Gone And Lost my Little Yo Yo” , “Forty Fahsend Fevvers On A Frush “, and “I Took My Harp To A Party”.

A bonus Charlton song for you, from a couple of well known singer/songwriters who I didn’t know were supporters.
They released this one under their band name, but it was essentially just Difford and Tilbrook:

» Squeeze – Down In The Valley

– I’m launching an appeal here: If anybody has that single in their possession please get in touch. The world needs to hear the Jug Band remix.