You remember Record Mirror ? Of course you do. RM managed to carve a niche for itself by being the grown up version of Smash Hits (In the early 1980’s your magazine readership went from Look-In » Smash Hits » Record Mirror – and then eventually Sounds or NME.)

Recently I moved house and somehow this one copy of Record Mirror managed to survive this latest move, as well as the transatlantic one I made years ago. I used to buy RM all the time but with the deepest regret and in hindsight now, never saved them when I should. Apart from this one edition.

I decided then to take inspiration from Brian McClouskey’s fantastic project (Like Punk Never Happened) and have scanned this surviving 25th of August 1984 issue of Record Mirror and put it online. If you just want to read the mag GO HERE. If you want to see some more detail read on…

The front cover (partly scanned for the above featured image) features Bobby Bluebell. I recognise him and I assume the others there with him are his fellow band members from The Bluebells. 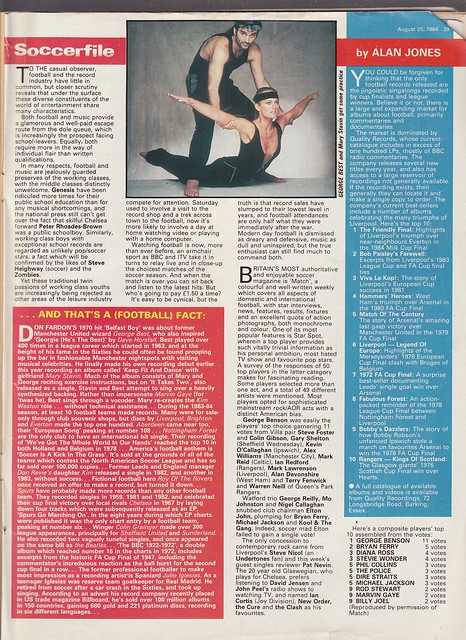 On page 2 there are a couple of football featured items. One of them is “The Bad Chant Top Ten” and the other is a photo of the (1984) Chelsea team in the studio with the caption:

Boystown at the Bridge would ya believe ? “Back On The Ball” is the single that welcomes Chelsea FC’s return to the first division.
It’s a bubbling affair replete with the usual soccer inanities, but “Back On The Ball” lacks the punky rash of the Blues previous effort, the seminal “Blue Is The Colour”.

The accompanying picture is of some of the members of the promotion winning Chelsea team from 1983/84 season (I assume). I’m having trouble recognising any of them though. How about you?

» Chelsea 1984 team – Back On The Ball Page three Index page has a feature and text in the top left hand corner about some video game called “Football Manager” – I wonder what ever happened to that ? On the right hand side a pic of Elton John at Watford trying to save multiple balls. This Record Mirror football special was compiled by Jim ‘West Ham for the Cup’ Reid.   Also on this page we have:  SOCCER HOODLUMS’ IN’S AND OUTS – Cyril Quigley Talks Tough
IN
Having a fatty in your mob; flares; getting chased by Shrewsbury; tripping over your flares as the train to Newcastle is leaving; Bradford Park Avenue; rowdy fat lads; arriving out of breath when the trouble’s over; Phil ‘Bagpuss’ Neal; Jack Charlton’s throat; dwindling attendences; knowing your team will do NOTHING this season.
OUT
Looking through the fixtures to see when you’ve got Chelsea; the weeds and dandelions on Chelsea’s terraces; corkscrew perms; any sportsgear apart from Dunlop and Gola; Ron Atkinson’s forehead; London’s fanatical hooligans; Nobby Stiles’ ball control; the 1966 World Cup Winning team; Uwe Seller; Liverpool not winning the Cup Winners Cup in 1966; not dressing warm for the match; Jack Charlton’s wisdom; the dissapearance of chewing gum sellers from footy grounds.
Skipping ahead to Page 8 and Page 9 and the first football section – starting with a Roy of the Rovers-type photostrip starring King’s lead singer Paul King and the story of him losing his magic boots.

If you know/remember who Paul King is/was then this’ll make sense to you. If not look it up, I can’t be arsed here. Instead have some music from him:

Side note: The editors of the magazine added a football slant to a couple of their regular features such as The League of Gentlemen (Page 6), as well as a football theme in a Tears For Fears interview. And a look at the music scene at the time like a football season. The Football 2 section.

Jumping ahead now to the most important part of the magazine. Reviewing the singles.

Now with doing a football and music edition of the Record Mirror, who could you get to do the singles. Someone who is in football but is also known for their impeccable taste in music and the type of music that RM covers. Hmm… who could they ask…

Pat Nevin himself said in the intro for the reviews that he had a hard time:

“I know it has been said many times before, but my heart bleeds for people who have to review singles every week. There is so much dross (especially from the U.S) which frankly does not deserve to be placed on my or anyone else’s turntable.”

You can go and look at the page (14) with all the singles that he reviewed that week. Below I have featured the track which were named as the Single Of The Week, as well as the Runner Up.

There were a couple of singles which became big hits – The Smiths – William, It Was Really Nothing which Pat said the 7 inch was too short and would like to hear the 12 inch. He also said that Kraftwerk – Tour De France Remix sounded like a 12 inch version of the 7 inch single. He also suggested that the idea for the song was borrrowed from Stevie Winwood’s ‘Arc Of A Diver’.

Other well known acts with singles released at the end of August 1984 included: Depeche Mode – Master And Servant; “I have never thought DM had much to offer…” – Lindsey Buckingham – Go Insane; “Fleetwood Mac go 1984 and far too cliched American rock-pop for my taste.” – Malcolm McLaren – Madam Butterfly; “Very close to single of the week except for the intrusion of Malcolm’s dulcet tones.” – Bucks Fizz – Talking In Your Sleep; “Consider the worst things about Bucks Fizz…” – Visage – Love Glove; “Surprisingly reserved attempt for a comeback after two years of legal wrangling.” – Marc Almond – You Have; “Possibly a minor hit wither ever coming up to Soft Cell’s finest moments.” – Sammy Hagar – Two Sides Of Love; “Sammy pretending to be Bruce Springsteen and fooling nobody…”

There was also the dross that Mr Nevin mentioned, apart from Feelabella – Feel It; “One of the passable US singles this week.” – As well as the forgotten tracks from Jay Novelle, J Blackfoot, David Austin (a former associate/friend of Wham) and from: Rock Steady Crew – She’s Fresh; “If it does better that the Associates’ ‘Loveboat’ I’ll give up totally on the British record buying public…again.” (It didn’t chart, the Associates reached No.53)

Some of the other notable singles included: Aztec Camera – All I Need Is Everything, Pat mentioned that it was being a less grandiose ‘Oblivious’ but at stages strays too close to Culture Club. He hoped for better from one of his favourite songwriters. There was also The Senate – The Original Sin; “Rusty Egan appears again with Spear Of Destiny’s Kirk Brandon” and Pat also says “Typically Brandon and rather good.” There was also Blue In Heaven – Julie Cries which reminded him of Psychedelic Furs without Butler’s voice and a single he would buy. Crazy Trains – Taxi Drive(r) that he was initially distracted by the front pic cover and thought it would be a minor hit (it wasn’t). And lastly there was One O’Clock Gang – Carry Me; “I’ve been waiting a while for this and it’s not a bad effort at all.” The band had Kenny Hyslop on drums and said there was enough evidence for Pat to go early to an Armoury Show gig to watch them in support. Although he didn’t think it would be a hit. He was right.

☛ I’ve taken the trouble of tracking down all the songs that Pat Nevin reviewed and created a YouTube playlist. After you listen to them all you’ll understand why Pat and all the other Record Mirror reviewers had a terrible time. Some great records were released that week, but more horrible ones.

On the next page Record Mirror caught up with Gary Crowley to ask him about his football dreams:

Forward to Page 20 and Page 21 (confusingly called page 44 by me on Flickr because I included the pull out VID section).
Record Mirror has a chat with various pop luminaries about their football and then a few footballers about their music.
Edited highlights:  Page 20:

…As for Martyn Ware – you know him best for his industrial electronics in Heaven 17, but next time Sheffield Wednesday are on the box, telescope into the crowd and see if you can spot him. And if Wednesday are winning, he’ll probably be rubbing his eyes in disbelief, because I tell ‘ee, there be a Martyn Ware Curse haunting the Wednesday.

…But not all your pop types go for the big names. Baz from the Farmers Boys likes the sound of Port Vale. “They’re my tip for promotion,” he says. “Mainly because I don’t know where they come from.”
…”I used to go Ipswich about 11 years ago. I can’t remember why I stopped. I think it was because I was always getting beaten up. I used to get two magazines, ‘Shoot’ and ‘Roy of the Rovers’…”
…When we used to play gigs with Serious Drinking and the Higsons, we never used to go and find the venue, we’d go off with a football and kick hell out of each other for two hours. We used to have a Farmers Boys team. One game we were 4-0 up at half time, then we got a crate of beer out, and we lost 8-4.”

…But if you are talking about footballers who know their music, then our singles columnist is definitely your man. That’s Chelsea’s Pat Nevin who’ll quote you names like The Cocteau Twins, Dead Can Dance and The Stockholm Monsters, without pausing for breath. And Pat knows he’s pretty unusual among players because of those tastes.
“There is one other player at Chelsea who’s really into music, that’s Paul Canoville, and he’s more into soul. Most of them don’t have a clue. No idea whatsoever. I don’t bother playing any Crispy Ambulance singles to them.”
I wasn’t always that way, though. “The first record I bought ? It’s sort of embarrasing, but I suppose I should tell the truth. It was a double album by Genesis, ‘The Lamb Lies Down on Broadway’.”
But he’s fine again now. “More often than not, it’s a case of listening to John Peel, taping off that, then if it’s good, going to get it. But I’m getting a bit worried about the way Peel’s getting shoved aside. If he does go, it’ll be a very worrying time. Those guys are gold dust.” I‘ve added the two remaining football feature pages below. Click on the images to view them closer up. They are: Page 22 (on the left) which talks about the footballers’ sartorial elegance whilst on the pitch. And Page 39 (right) which has a photo and gives a mention to George Best as well as featuring other footballing items.

A highlight from that:

Britain’s most authoritive and enjoyable soccer magazine is ‘Match’, a colourful and well-written weekly which covers all aspects of domestic and international football, with star interviews, news, features, results, fixtures and an excellent quota of action photographs, both monochrome and colour. One of its most popular features is Star Spot, wherein a top player provides such vitally trivial information as his personal ambition, most hated TV show and favourite pop stars. A survey of the responses of 50 top players in the latter category makes for some fascinating reading. Some players selected more than one act, and a total of 49 different artists were mentioned. Most players opted for sophisticated mainsteam rock/AOR acts with a distinct American bias.   George Benson was easily the players’ top choice garnering 11 votes…

…The only concession to comtemporary rock came from Liverpool’s Steve Nicol (an Undertones fan) and this week’s guest singles reviewer Pat Nevin. The 20 year old Glaswegian, who plays for Chelsea, prefers listening to David Jensen and John Peel’s radio show to watching TV, and named Ian Curtis (Joy Division), New Order, the Cure and the Clash as his favourites.

Wrapping this up now with a few tracks from other bands that were mentioned on Page 22 as Pat Nevin’s favourites.