The inspiration for a few of these posts sometimes come from an unexpected place. This one is no exception and started when our football and musical friend from 45football mentioned an article via his Twitter account. The article reports about a radio DJ who has collected nearly every record that has entered the official UK charts since 1952. As mentioned he has nearly every record but is missing three from his collection. One of those missing is what piqued our interest and led to what you are reading now.

That missing recording that got our attention is: The QPR Massive – Soopa Hoopz. It was released in 2004 and spent one week in the lower reaches of the top 75 before disappearing again. The reason for that interest is because the tune used in the single is a familiar one.

Here is that QPR Massive track, see if you recognise it:

The borrowed song was first recorded by the band Pigbag and the tune is called Papa’s Got A Brand New Pigbag. It was released in 1981 but it took a couple of years before it hit the charts and since then hasn’t left our collective consciousnesses. The reason being that strong bassline and very memorable melody, something that could easily be adapted for anything.

But the question is though – How did this song get associated with QPR ?

It was the celebrity QPR fan My Brother Woody, previously featured here on F&M who pointed us to the answer to that. The tale is told on the Trust The Wizards website:

…I spoke to Pete Nuttall to find out how the playing of Pig Bag at Loftus Road came about. Pete is better known to Rs fans as the matchday DJ and announcer from 1997 – 2013.

Pete said: “I remember a chat with the then marketing manager, Mark Devlin, where we settled on Pigbag, and thought we’d try it at a game. We all agreed that if it didn’t work, if it got a negative reaction, or if a significant minority didn’t like it, we’d kill the idea stone dead.”

But, as Pete explains “It worked far better than we anticipated. It galvanised our celebration and Loftus Road was bouncing.”

As Pete Nuttall says: “I know many football fans rally against the idea of goal music, artificially pumping the atmosphere and drowning out the actual cheers and in general I agree. Your striker has just hit a 30-yeard pearler that has sent you up, why not soundtrack that epic moment with DJ Otzi? But at Loftus Road, Pigbag just works. It’s us.”

That question answered then, but in the course of this discussion we decided to look at the (unimaginatively titled) musical history of QPR. This is not going to be a full look at all the songs associated with the Loftus Road residents, just some highlights.

Beginning with…
’67 Now this is possible the strangest of football singles because it was recorded and released after Queen Park Rangers had appeared in and won the League Cup. They were in the Third Division at the time – and they won that league before playing West Brom at the first time the competition was played at Wembley.

How did the match go and what was the score ? Have a listen to the singer – and the winger for the QPR who played in that game tell you:

» Mark Lazarus and the QPR – QPR – The Greatest

The B side was given over to the supporters who sang/chanted about the team and “Rodney (Marsh), Rodney, Rodney, we want Rodney…” It is a very weird psychedelic freakout:

» The QPR Supporters – Supporter – Support Us ’72 Looking at the English football league history on Wikipedia and for the 1971-72 season there was nothing to sing about. The team didn’t do anything of note. The next one 72-73 QPR were in the 2nd division and did finish runners up and were promoted. Maybe that was the reason for the following tunes. Both tracks from the single are your standard 1970’s team singalong/brass accompaniment. Neither very inspiring. 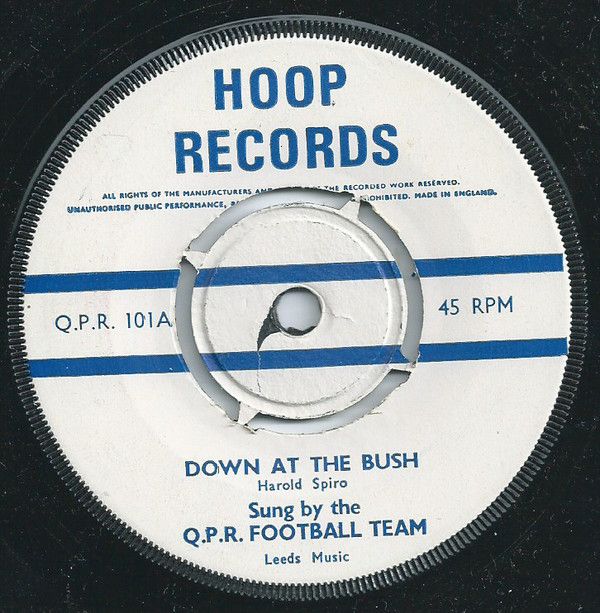 » Quick sidenote before we continue for this one previously mentioned on the Harold Spiro (the writer of the tune) post. We know that it exists because of the Discogs entry but there is no information on what year it was released. We don’t know what it sounds like either. If you have any info please post a comment.
Q.P.R. Football Team ‎– Down At The Bush (Hoop Records)

Finishing this off for now with:
’77 Again there’s no clear reason for the release. In the 1977-78 season they finished just one place and one point above relegation. A dive into Wikipedia has this:

”In 1976-77, QPR failed to recreate their fine form of the previous season in the league, but the cup competitions saw some success. The side reached the semi-finals of the League Cup but lost in a replay to Aston Villa and in their first entry into European football reached the quarter finals of the UEFA Cup losing to AEK Athens FC on penalties. In 1977 Sexton moved to Manchester United to be succeeded by Frank Sibley and Steve Burtenshaw and two years later QPR slipped into the Second Division.”

The song released in 1977 fully jumps on that Bay City Rollers sound: