This is not about Stuart Pearce attending a Sex Pistols reunion concert during Euro ’96 (that really did happen) or about John Lydon being an Arsenal supporter. This is about a couple of artists who they might have met, I’m sure have listened to anyway, also have links to football via their music.

John Peel as well (gratuitous mention for my other gig at Keeping It Peel) – both recorded Peel Sessions.

You are all familiar with the punk poet John Cooper Clarke, these two were also in that category but didn’t get the same national acclaim as JCC. Setting that record straight here and now. 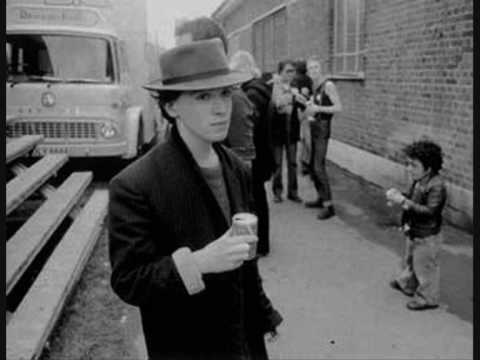 First up is Patrik Fitzgerald who could be described more as a folk punk than a poet, but if you listened to when Cooper Clarke put his poetry to music, it sounded like what Fitzgerald was doing.

– Snippets from his Wikipedia entry:


His early songs were generally short, sarcastic efforts, recorded with just an acoustic guitar and occasional studio effects, with lyrics containing a large amount of social comment. Fitzgerald was soon regarded as an original of his genre, somewhere between a punk-poet and an urban folksinger…

…He was a regular customer at the Small Wonder record shop in London, and they launched a record label Fitzgerald was one of the first to submit a demo – and got a deal, with the new label releasing his first three EPs, the first being Safety-Pin Stuck in My Heart, still his best-known work, and one which he subtitles “a love song for punk music”

He performed all around London at the punk gigs and supported The Jam on a national tour.

– And where the football part comes in here: There was a track on his debut album in which he sang of the experiences of attending a match back in the late 70’s. It was when the grounds were dilapidated, when there was fighting, when watching the football wasn’t enjoyable for anyone.

It’s no fun being sliced in two by a railway train
It’s no fun being thrown down stone stairs with parts of you in flame
It’s no fun keeping memories in the form of scars
and an autograph doesn’t seem the same when it’s written on a plaster cast
It’s no fun getting chased down the road when you’re — — —
In the back of a pub, crates of beer bottles and, that is all
You scream but at that moment the home team, almost score
You give up your fanclub membership, your scarf but you know, they want more…

The competition for a coffee and muffins on a Saturday
While the suspends — playing your favourite tunes
The telephone’s off the hook no one to answer the door, waiting for the final score

It’s no fun when you head looks like a slot in the toilet door
Because someone thought better than spending a penny and threw it just to see it, sore
Above the heads of the crowds they shouted out loud, waving to a camera
They’re coming for you on a stretcher (bye bye) I guess we won’t see you anymore

As you can see had trouble understanding some of the words, if you can help leave a comment below.

This track was also part of a Peel Session:

The next punk poet is Attila The Stockbroker and I’m going to extract and mention some of the important bits from his Wikipedia entry here:

…was briefly bass player in punk bands English Disease and Brighton Riot Squad, and spent some time in 1979 in Brussels playing bass in Belgian band Contingent before going solo.

…He did his first gig as Attila the Stockbroker in September 1980. At first he performed poems and songs in between bands at punk rock concerts, accompanying himself on the mandolin…

His wiki entry is long because he’s had a long career and I wanted to get to the relevant part. The football.

Brighton & Hove Albion F.C. are now residents in the Premier League but in 1997 they were one goal away from being relegated to the Conference. It was the last day of that season and they had to either win or draw against the team below them to survive. They didn’t help their cause when their defender scored an own goal, but then on 62 minutes the sub Robbie Reinelt pounced onto a rebound to slot it away to draw the game. At the final whistle it was H*reford who exited the league, never to return.

There still wasn’t sunshine for the Seagulls, during the season their dodgy owners at the time sold the Goldstone Ground and they were exiled for a few years. Imagine having to travel 70 miles to watch your home team play. Despite this they continued to survive and they eventually moved back to Brighton, albeit in an athletic stadium.

They also climbed the tables and plans were put in place to build a new home at Falmer.

You know that they are there now but it was a long drawn out, painful journey to get there. After the planning applications were submitted there were objections filed by nearby potential residents (“not in my back yard!”) and from Lewes Council.

Further complications arose because of fields nearby, some of which were designated areas of national beauty. There were public inquires taking place and the process seemed to go on and on. Years were passing by with still no stadium on the horizon.

It was during this bogged down in red tape/glacial pace phase when Attila The Stockbroker decided to take action to highlight Brighton’s plight. He rewrote the lyrics to a familiar song originally done by another well known Brighton artist, then gathered together other local musicians and they recorded this single. As the man himself wrote: ‘with the dual aim of raising money for the Albion’s Alive & Kicking Fund and trying to take the song, and the Falmer For All Campaign, into the Top 20 in the month before the Public Enquiry restarted in February 2005’.

You will remember The Piranhas featuring Boring Bob Grover, they hit the charts with their cover of the tune. Attila The Stockbroker asked Bob to appear on the single, he declined but gave his blessing to this version. Sample line:

‘For years the planning process has dragged on and on/A paralytic snail wouldn’t take that long/We’re stuck in an athletics track we really hate/Like playing in Albania Division Eight!’

The hearings dragged on and at one point it looked like things were going their way when the then Deputy Prime Minister approved the scheme, but no. Another objection raised, a withdrawal of that. Another separate inquiry, hearings… until finally in September 2007 they got permission to proceed.

It still took some time to build but eventually the now named Amex Stadium was opened in 2011 and in 2017, twenty years after being 30 minutes away from dropping out at the bottom, Brighton were in the Premier League.

Oh the Sex Pistols/Stuart Pearce-attended gig I mentioned above – he took Gareth Southgate with him.
He was never the same again.