I’ll begin with a big thank you to Aimo Veto, who dropped me a line to tell me about Jari Litmanen.

He celebrated his 40th birthday on Feb 20th and guess what – He’s still playing.

But wait, that’s nothing though, only the tip of the iceberg. Still loads more to tell…

Jari is currently a free agent after playing for FC Lahti last season and everybody was talking about Rooney and that goal. Well I’d like to see him still doing that at 39 years old as Litmanen did in October last year:

Pick the bones out of that.

But that’s not all…

Jari is Finland’s all-time leading scorer and also (obviously) the longest serving when in January last year in a friendly match, he had the distinction of playing for Finland in four different decades.

“Litmanen became the oldest player ever to score for Finland and also the oldest player overall to score a goal in the qualification competitions for the European championships when he netted a penalty in an 8-0 win over San Marino.”

Jari Litmanen still hasn’t yet stated, whether he is going to continue playing or not.

Aimo, who mailed me, told me that in Finland he’s referred to as “kuningas”, and while briefly playing for Malmo, the Swedes also called him “Kungen Litmanen” – both meaning KING.

It doesn’t end there – here’s the kicker:

In October 2010 there was a statue unveiled of him: 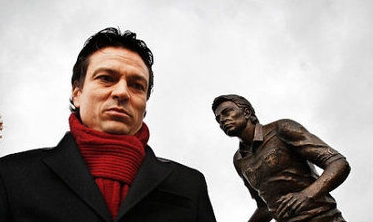 “The first one is by Martti Servo & Napander (a popular Finnish humor outfit), in Finnish, but a fitting homage to his heroics in Ajax & Finland team among others. (Hitti = a hit; Litti his nickname)”

“The second one is by The Blaster Master (a Finnish ska band)” [The title is about him, but the song isn't] “…and the third one is by Sly Okka.” [This is my favourite] “…both songs obviously referring to his frequent absence to starting 11’s.”

– He was left out of Finland team against Belgium on Feb 9th due to not being fully fit. There is another game, a friendly against Portugal on March 29th. We’ll all have to keep one eye out and see…

LATE UPDATE:
More from Aimo, about his retirement and…

“…And there is more to come, one of our most prominent film directors (Mika Kaurismaki, elder brother to more famous Aki) is working on a documentary on Jari’s life and career.

Bit more info on this in my blog from October: This one translates as “sculpture & films”.

He seems quite undecided whether to continue his career or not. He told lately it’s very unlikely he would continue with his original hometown FC Lahti (relegated from top league last season), and we’re guessing now whether he would join HJK Helsinki (with CL qualifications to come) or one of top Estonian clubs (he now lives in Tallinn), or call it a day. Will have to see. He will eventually go into coaching/managing, but when and with whom. No one knows. Ajax have presumably promised to take him when he quits playing. National team would need him as well.”

Brilliant. As I said there’s a friendly for Finland in March and there’s another Euro qualifier (against San Marino again) in June. Make a note. Get yourself on the Jari watch.