The state of (singing) things with the 1990 World Cup teams…

There might be more teams who have 1990 World Cup songs done, these are all the ones I know.
If you have knowledge of any others drop a line in the comments.

Doing a song for your team at the World Cup still hadn’t really took off yet. But there’s one country that was ahead of everybody else and already had a number of tunes released. No it wasn’t England, it was in fact the….

After their exploits at Euro ’88 (Joxer Goes To Stuttgart) and with Jack Charlton at the helm, the whole country was looking forward to Italia ’90.

Their official 1990 World Cup song was this one. Also involved in the single was Davy Spillane, Máire Brennan from Clannad and Larry Mullen Jr from U2:

There were a few other unofficial songs. This one was done by two of the other most famous Irish bands, The Dubliners and The Pogues:

» The Dubliners and The Pogues – Jack’s Heroes

Liam Harrison urged Jackie Charlton to give it a lash: 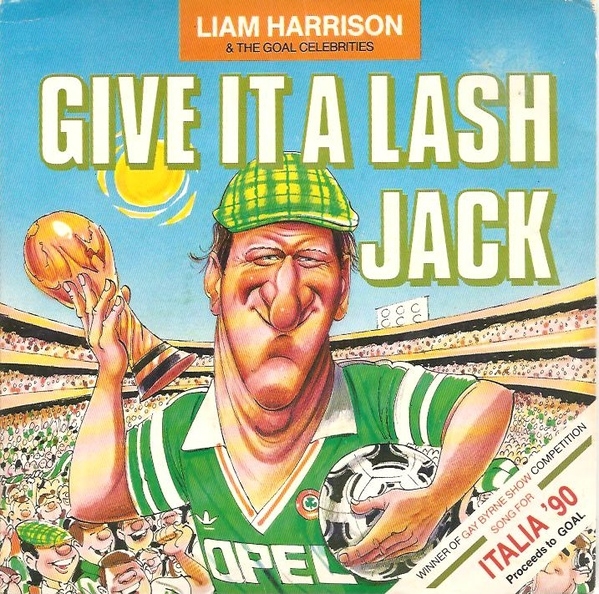 » Liam Harrison and the Goal Celebrities – Give It A Lash Jack

This hit the number one spot in Ireland for one week (May 17th 1990). It is a reworded song set to the Billy Joel tune ‘We Didn’t Start The Fire’

Paul McGrath, Back Four
Aldridge got another score
World Cup
English Clubs
Kevin Moran and the Dubs
European Championship
How can we forget the trip
Andy Townsend, Kevin Sheedy
Stapleton’s a supersub

Stuttgart was no dream
now we have a winning team
Billy Bingham, Budapest
Man of Magic, Georgie Best
Eamon Dunphy writes it down
Dalymount to Landsdowne
English Football in a mess
Trouble on the Terraces

Netherlands, Egypt
England got a free trip
Pleaded, Seeded
Because of the supporters
Ruud Gullit might be out
Holland wouldn’t have a shout
Hoddle and Waddle
Have they got the bottle
We have England in the draw
And the Dutch like before
One thing that were grateful for
We didn’t get the Mafia

Seeded in Sicily
Off the coast of Italy
6 hour boat trip
We can take the hardship
But the fans couldn’t care
They can travel anywhere
No one else can match the sound
Our supporters bring around
June 11, English Game
We can do the trick again
Egypt next and then the Dutch
Its the second round for us
When we finally get to Rome
No one will be left at home
Aldridge is about to score
Listen to the Irish Roar

The best though was the late, great Dermot Morgan. He did guest vocals on this one:

There was another team who had more that one song done about them. No it wasn’t England, it was:

Their official song was with the national team and a band called err… After Shave:

The above two you didn’t know. This next one I can say for certain you’ve never heard either. Or realised this team was also at the 1990 World Cup for that matter.

This was the last time that Yugoslavia would play at a major football tournament.
You can listen to the B-side over at 45 Football if you feel like inflicting more pain upon yourself.

⇒ Another team you may have forgotten that they were there. It took them 40 years but the…

…were back and going to celebrate in a very American way with a jaunty rap song filmed on a California beach. The lyrics filled with more cliche’s that should be allowed. If you played a drinking game you’d be wasted.
Work hard. Stay in school. Stay off drugs… DRINK !

Oh – and keep a look out for the cameo of one O.J. Simpson.

Enough of the terrible music, let’s move on and bring it back with:

And here’s the shirt that the Scotland team were wearing during the recording of this song:
*throws up in mouth a little*

More of that here and here.