You may not know of this ex-Italian international, but if you heard him speak you’d think that he was from the valleys. Which at one time he was. 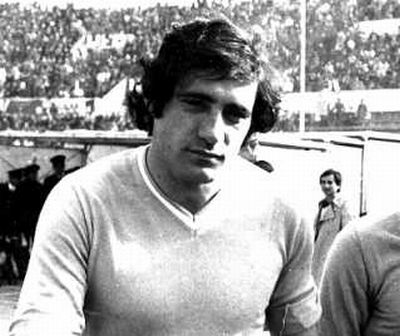 Giorgio Chinaglia was born in Tuscany, but because of high unemployment in Italy after World War II he and his family moved to Cardiff.

It was during these formative years that he picked up a Welsh accent and a football.

…”Chinaglia was often late to training and had taken to drinking, gambling and womanising, and with no British club interested in signing him, Swansea allowed him to return to Italy on a free transfer…”

And it was back in his homeland where Giorgio began to flourish. Eventually signing for Lazio where the striker made 209 appearances.

But then in a move that surprised everybody, Chinaglia signed for the New York Cosmos.
Surprise because he was still 29 and probably had a couple of more seasons in him. The fans of Lazio were puzzled and annoyed. What about the Italian national team too ? Why (in their minds) was he turning his back on them ?

Well you see as hinted above in his time at Swansea, Chinaglia was one of the 70’s bad boy footballers. He was a champagne Charlie and rubbed everybody up the wrong way. He liked a brandy and smoked cigars. Love the rock ‘n roll lifestyle so the chance to move to America, play alongside Pele and make a pile of money was an opportunity too good to miss.

» The video below is taken from a great documentary made in 2006 called; “Once in a Lifetime: The Extraordinary Story of the New York Cosmos”. In the clip you will get a better picture of what Chinaglia was like and what others thought of him:

Eventually he played for the New York Cosmos for seven years and in his time scored 193 goals in 213 appearances, which was a NASL (North American Soccer League) record.

As always we’ll end with a song…

Going back to Chinaglia’s time at Lazio – And you know what happens when a footballer hits the height of his fame and notoriety. That’s right, they immediately head into the studio.

– This song I discovered via the Italian language site: Orrore a 33 Giri (Horror at 33 rpm). Which like F&M it does as it says on the tin.

Plug your ears then when listening to this mid-70’s bombastic nightmare (I find that it sounds better that way):

UPDATE: 1st April 2012: I have just learnt of Chinaglia’s passing. Sadly not an April Fools joke, but genuine:

“Former Italy international Giorgio Chinaglia has died at the age of 65 in his Florida home on Sunday morning.

The former attacker had only recently returned home after being taken to hospital last week with heart problems.”

I for one will miss him (if you can watch that New York Cosmos video clip) because I love these “larger than life” characters. These days they are getting too serious and are becoming few and far between.